Masks and Mobsters was listed as USA Today's Best of 2012 for Digital Comics.

Looking at the list of other winners... I'm in shock.
Humbled to be around such amazing talent and awesome comic books.

"Best digital series:Masks & Mobsters. Part of Chris Roberson's MonkeyBrain Comics line, Josh Williamson and Mike Henderson's title is one of the best deals in comics — 99 cents an issue for an intriguing black-and-white tale about gangsters, snitches and the first caped do-gooders."

Thanks to everyone for helping us spread the word about our little digital comic.
Here is a link to the actual article
http://www.usatoday.com/story/life/2012/12/24/best-comic-books-of-2012/1789531/

Here is a quick preview of chapter six.

Posted by Joshua Williamson at 10:39 AM No comments:

Masks and Mobsters Holiday Special and the RED CROSS

One of the best things to happen this year has been the release of MASKS and MOBSTERS.

To celebrate and say thank you we have put together a special Holiday issue of Masks and Mobsters. It's our own take on a classic holiday story. It's one of my favorite stories of all time and I hope you appreciate our homage to it.

All of the creative team proceeds from this issue will be donated to the Red Cross. We've had a good year when others haven't and wanted to give a gift to those who need it. Every thing that Mike and I make will go directing to the Red Cross.

Mike and I knew that we wanted to do something special with the holiday issue. My original idea was to offer it for free, but Mike knew better and suggested that we donate the money to the Red Cross. I immediately knew Mike was right and started to set things up. This is not a promotional tool. Just our attempt at giving something back.

Here is a link to the an interview about the issue.

Also here is a link to a Reddit AMA where Mike and I can answer all your questions about Masks and Mobsters! CLICK HERE

And of course a link to download the actual comics. I hope you enjoy it and have a wonderful Holiday season. 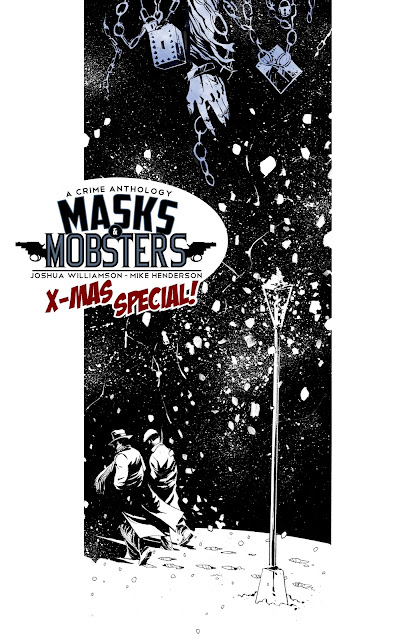 Posted by Joshua Williamson at 8:36 AM No comments: 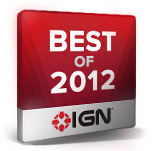 MASKS AND MOBSTERS is up for IGN's best  of 2012 Digital Comic Award.

Please take the time to vote. You don't have to register or sign up for anything just click on Masks and Mobsters and hit vote.

Monday December 17th is the last day to vote!

In a lot of ways we are the underdog here. Up against Batman and Superman. Don't get me wrong... I love those guys but I'd like a fighting chance.  Those books have a marketing team behind them, we just me, Mike, and Allison at Monkeybrain. It's a constant struggle to launch anything new, so please give us a vote.

CLICK HERE TO VOTE
Posted by Joshua Williamson at 8:32 AM No comments:

Masks and Mobsters 3 and 4!

Masks and Mobsters 3 and 4 are available on ComiXology!

I forgot to do a blog post about Masks and Mobsters 3 and 4, so here ya go.

So far the book continues to be a hit critically and in sales. Whenever a new issues launches, not only is it in the top 99 cent books, but the rest of the issues usually jump up as well. We even got nominated for an IGN best of 2012 award! (More on that later) Mike Henderson has been doing an amazing job on the book. I'm lucky to have another artist that I click so well with.

Thank you to everyone that has supported, retweeted, blogged, or took the time to review the book.
Every little bit helps

Here is some info on both issues.

ISSUE THREE: Where were you the night Doctor Daylight died? Every Mask and Mobster in Golden City remembers that night. A single bullet and one dead superhero changed the city forever, and now via some after hours pillow talk we hear one Mobster's tale about that night and his crazy encounter with a Mask that proved to be deadly! The critically acclaimed series that CBR called "easily the best comic for quality/quantity/price available this week" continues!

Here is a link to where you can order all four issues!
Also you can check out the awesome banner that Monkeybrain and ComiXology made for the book.

Don't forget that you can also send people issues as gifts! Just click on the little gift button on the side while on the ComiXology website. 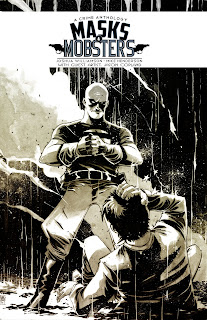 ISSUE FOUR: The heroes have started to organize and attack the Mob's best joints! So the Mob has sent their best wise guy to the Mask's bullet proof man, The Tower, with an offer that the Tower can't refuse and it isn't money! Special Guest artist: Jason Copland! (Kill All Monsters!! Murder Book.)

Read Comic Books.Net gave Issue Three 10/10
http://readcomicbooks.net/home/masks-and-mobsters-3/
There was an amazing write-up about the book on Bleeding Cool:
http://www.bleedingcool.com/2012/11/27/masks-mobsters-and-mike-henderson/
Issue Four got a 4/5 star review on CBR:
http://www.comicbookresources.com/?page=user_review&id=5454


Posted by Joshua Williamson at 8:22 AM No comments:

One of my current projects that I'm super excited about is Captain Midnight with Dark Horse.

It was recently announced that Dark Horse Comics Free Comic Book Day books will feature a short Captain Midnight adventure! This book has been kick ass to to work on and I'm looking forward to FCBD this year where I can share with you this short story!

Don't forget that the first three Captain Midnight adventures are running through Dark Horse Presents 18-20.
Issue 18 is already out with an amazing Steve Rude cover! 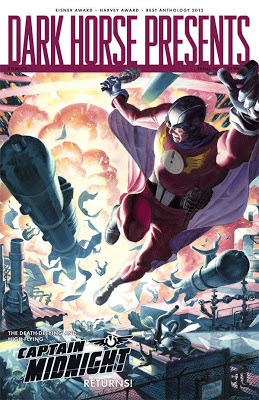 Posted by Joshua Williamson at 1:15 PM No comments: